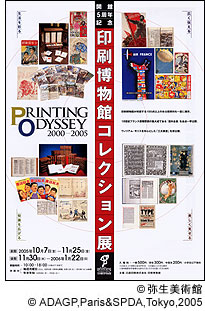 The Printing Museum, Tokyo celebrated the 5th anniversary of its founding in October. Since the beginning we have continually been adding materials connected with printing to our collection and at present have more than 50,000 items. However, we have been able to display only a small part of our archives, while numerous items of historical importance have remained in our vaults. To mark our 5th anniversary we are proud to unveil some of these never-before-seen items in "PRINTING ODYSSEY 2000-2005-The Printing Museum, Tokyo Collection Exhibition." The exhibit presents rare publications, including original editions of what are considered to be the three most beautiful books in the world (such as William Morris's The Works of Geoffrey Chaucer), and all of the 35 first editions of L'Encyclopedie, compiled during the 18th century French Enlightenment. Numerous posters both from Japan and abroad are also displayed, along with newspapers, textbooks, picture books, popular magazines, woodblock prints, typography-related materials, and other various items.

*In the same way that Odysseus set sail on a grand adventure in the Greek epic poem the Odyssey, we at the Printing Museum set forth on our own adventure in the year 2000 at the turn of the century. Thus the name "PRINTING ODYSSEY" for this very special exhibition.

- Column Exhibition
As a record of the Printing Museum's achievements over the five years since its foundation, videos and posters recalling the 10 special exhibitions that have been held up to now are displayed. There is also a corner for perusing these special exhibition records.

- Information on Related Events
Demonstrations of creating ukiyoe prints as well as printing workshops are held twice every Saturday, from 13:00 to 14:00 and from 15:00 to 16:00 during the run of the exhibition. The number of participants in the printing workshops are limited in each session to the first 10 people to arrive.

Every Sunday between 14:00 and 14:30, a gallery talk to explain the exhibition is given by our curator.