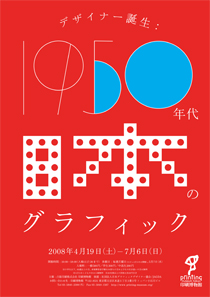 1950s Japan: The Blossoming of the Graphic Designer

As the confusion following World War II began to subside, the 1950s found Japan on the road to becoming a major economic power. In all areas of society, and particularly in the fields of economics and trade, people were paying more and more attention to design. The design of anything manufactured--from traditional handicrafts to industrial products--was regarded as one of the elements supporting the Japanese economy, and design showed great improvement in quality as it came to be included in industrial activities.

This exhibit features some 500 items, including newspaper and magazine advertisements, pamphlets, wrapping paper, packaging, and books, in an attempt to demonstrate all aspects in the development of graphic design in the 1950s as the foundations of postwar design were being laid.