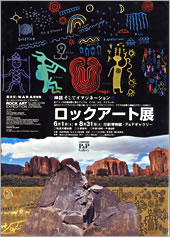 Instead of an alphabet, the natives of North America from ancient times depicted their ideas visually using iconographic images fashioned on rocks. "Rock art" was the coloration and sculpting of rock faces, megaliths, and so on to express ideas symbolically.

From 2000 to 2002, the N.A.R.A. Expeditionary Team ventured to the American continent over four times to study the ancient rock art of the Native Americans.

This exhibition features mainly photographs of the iconographic images rendered on the rocks of North America by its ancient inhabitants, as well as hieroglyphic arts by Kiyoshi Awazu, director of the Printing Museum, Tokyo and captain of the N.A.R.A. Expeditionary Team.

Kiyoshi Awazu is also holding a panel discussion and drawing workshop on rock art. Visitors are encouraged and take part.