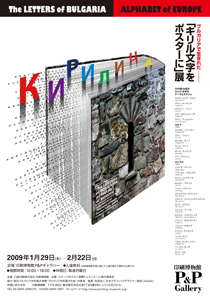 Born in Bulgaria — Using the Cyrillic Alphabet in Posters

Thirty People from Twenty Countries Contributed One Letter Each

One of Europe's traditional alphabets, the Cyrillic alphabet was born in Bulgaria. Thirty designers from twenty countries were asked to produce letters in the Cyrillic alphabet for the 5th International Triennial of the Stage Poster held in Sophia in 2007. The exhibition traveled to Paris and New York, and will also be presented in Tokyo this year to commemorate the 50th anniversary of the reestablishment of diplomatic relations between Japan and Bulgaria. With designers from around the world each being given one letter to create, the exhibition demonstrates new and original ideas in typography.