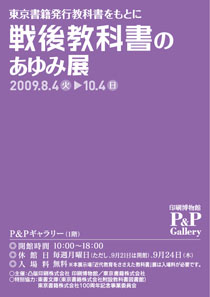 A Record of Textbooks after World War II

In February of last year new curriculum guidelines for elementary and middle schools were announced in Japan. Based on these, a new curriculum is to be gradually implemented beginning in the 2011 school year, and for that reason publishers are presently working to develop and edit new textbooks.
After World War II, the system of publishing textbooks in Japan was fundamentally revised. The system whereby textbooks had been compiled by the state for 40 years since the end of the Meiji Period was abolished, and in its place a new system for private enterprises to edit and authorize textbooks was inaugurated. Textbooks have subsequently been edited according to curriculum guidelines, and at present they have undergone seven major revisions. Textbooks in each era reflect the conditions of society at the time, and their contents have undergone vast changes. Based on textbooks published by Tokyo Shoseki, this exhibition looks back on how the contents of textbooks have changed through the years.