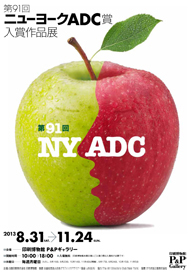 The exhibition displays some works that were awarded prizes at the 91st Annual Art Directors Club Awards in New York.

The ADC Awards are the world's oldest awards of their kind, and are given to works in the categories of design, illustration, and photography, as well as in the fields of advertising and interactive media.

The Art Directors Club is the formal name of the New York Art Directors Club. Based in New York City, it is an advertising art group founded in 1920. Once a year, it accepts entries from around the world in such fields as advertising and graphic design and judges them. From ten thousands of entries, the Club presents awards in each category.