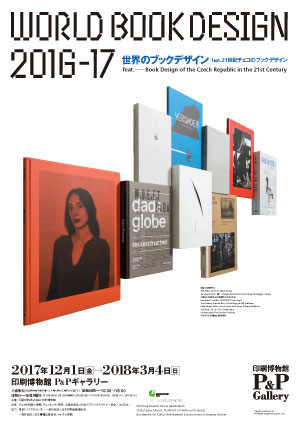 feat. Book Design of the Czech Republic in the 21st Century

The exhibit features some 200 books, including books of superior design from Japan, Germany, Holland, Switzerland, Canada, China, Czech, and as well as books accepted for the Best Book Design from all over the World 2017, which is held every year in March at the Leipzig Book Fair.

There were books whose binding, printing, and typography were flawlessly designed in a traditional manner, as well as many surprisingly unconventional books. All the books on display made one realize how high the level of design and bookbinding techniques are today.

"The Year of Czech Culture in Japan 2017" falls in this year, so in addition to the works awarded at "Nejkrásnější české knihy roku 2016", we set up a special corner which focused on Czech book design of the 21st century and introduce 50 copies of books.

*There are some books that are not available due to the limited number of copies, this is not the exhibition of all prize-awarded works.