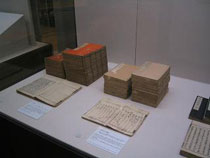 The Spectacular World of Typography in Olden Times

Publications from the Collection of the Printing Museum, Tokyo

The Printing Museum, Tokyo is proud to present items from its collection in a series of exhibitions which will change every 3 or 4 months over a period of some one and a half years until 2011. You will surely marvel at the treasures on display in each of these unique exhibitions.

"Typography in olden times" refers to the typography that flourished in the early part of the Edo Period in Japan. A great variety of publications appeared at that time, including Chinese classics, Buddhist scriptures, medical texts, guidebooks, and Chinese and Japanese literature.
The typography that produced these works had a great cultural impact on both the art of printing in the Edo Period as well as on the lifestyles and consciousness of the general populace of Edo.
The publications made possible by typography in the Edo Period possess not only great beauty but also important historical and cultural significance, and we are delighted to be presenting a selection of them for your enjoyment.