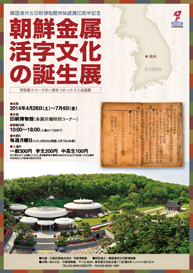 The second zone will introduce the type-casting and printing technologies used to produce Baekunhwasang Chorok Buljo Jikji Simche Yojol ("Jikji"), the oldest extant book printed with metal type. Visitors to this section will learn all about Jikji, the copper type used to print it, where and when it was printed (Heungdeok Temple in Cheongju, Korea in 1377), the historical significance of Jikji in general, and the methods used to cast copper type in 12th century Korea.

The third zone, "Metal type culture in Korea," will demonstrate that printing with metal type was practiced on the Korean Peninsula ahead of Gutenberg's movable type printing with wooden printing presses and lead casting type. Visitors to this zone will see a restoration of an ancient Korean typesetting shop and facsimile reproductions of works such as Sipchil sachan gogeum tongyo (Essentials of seventeen Dynastic Histories, published in 1403) and The Buddha's Moon Reflected on a Thousand Rivers (printed in Hangul type).