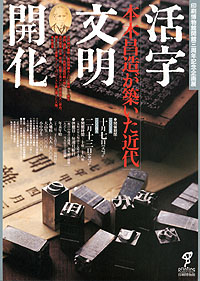 The 3rd Anniversary Exhibition of the Printing Museum, Tokyo

The Dawn of Japanese Movable Type

Modern Japan was built on the Meiji Restoration and the cultural enlightenment. Information emerged as one of the driving forces behind the Restoration and enlightenment, along with the modernization that followed. The efficient dissemination of information became crucial to the formation of the modern state of Japan, and the means for this effective communication of information to the masses was the import of movable type technology from Europe and America. This exhibit focuses on the introduction of Western movable type technology and Shozo Motogi's contribution to the foundation of the modern printing industry in Japan. The exhibit further shows in systematic fashion what effects the new technology had on Japanese society, the social value of printing as a communication media, and the role of printers in sustaining the media.