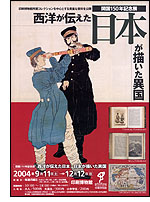 The Opening of Japan, the 150th Anniversary

Seeing and Seen: Variations in Depiction between Japan and Foreign Lands

This year marks the 150th anniversary of the signing of the US-Japan Peace Treaty.

All during the time when Japan was isolated from the rest of the world until it opened its borders in 1854 and seized the opportunity to establish closer diplomatic relations with the countries of the West, people in Japan and the West alike increasingly showed interest in each other, and had relied on various visual information sources to envision each other's culture. On the part of the West, this increasing interest served to push Japan to open its borders, and on the part of Japan it served to advance the introduction of Western culture and modernization.

Printing, in the form of maps, book illustrations and woodblock prints, took on the role of providing the visual images which swelled imaginations in both Japan and the West. Even during Japan's period of isolation, these printed sources of visual information were available, and excited the public's curiosity. After Japan opened its borders to trade with the West, prints illustrated the modernization of Japan as it adopted and adapted Western culture, signaling the arrival of a new age. What made the propagation of these visual sources of information possible was the various printing techniques involved in the production of woodblock prints, copperplate prints and stone prints.

The items from our archives in this exhibit illustrate what kind of images people in Japan and the West held of each other and how these images developed, from the time of Japan's period of isolation to the period when Japan opened its doors, resulting in closer diplomatic relations between Japan and the West.