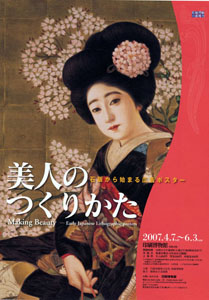 Poster advertisements were introduced in the Meiji Era at about the same time as planographic printing, the ideal method for printing the posters. In this exhibition we present 160 poster advertisements, together with their original drawings, from the dual perspectives of "advertisement" and "printing." The earlier works were created during the final years of the Meiji Era; the later works, during the late prewar period of the Showa Era.

These posters and the planographic printing technique introduced to Japan in the Meiji Era are still adored today. The techniques of planographic printing and the expressions of printed posters have advanced through a dynamic interplay over many years. The eloquent and colorful posters of beautiful women, a timeless subject now lavished with the newest printing technologies, attest to the power of the poster as an advertising medium. In this exhibition of posters of beautiful women, we introduce the world of poster production from the perspectives of printing technique and advertisement production.