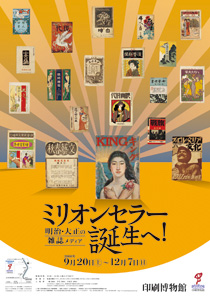 The Birth of a Million Seller

Magazines as media in the Meiji-Taisho era

In Japan, a million-selling magazine appeared only 60 years after magazines were first published.
During that time, advances were also made in the printing and distribution of magazines.

Both affordable and entertaining, magazines broadened the horizons of their readers and initiated cultural trends by providing the latest news and information about the world at large. In some cases, magazines even served as the driving force behind the times in which they were published.
Magazines started gaining popularity in Japan in the Meiji Period, and during the subsequent years from the Taisho Period to the beginning of the Showa Period they came to be widely read by the populace. In 1927, King, published by Kodansha, became the first magazine in Japan to have a circulation of over one million. By that time, the habit of reading magazines had become an integral part of a contemporary lifestyle.
The present exhibit introduces the various types of magazines that were popular in the subsequent periods following Japan's opening to the West, and demonstrates the process by which those magazines rapidly became a medium that supported the lifestyle of the general public. The exhibit also shows how magazine sales increased and new forms of expression developed--both reflections of the advances and developments taking place in the printing industry--by comparing those processes to the progress being made in the fields of publishing, printing, and distribution.

The Meiji Shinbun Zasshi Bunko, The Center for Modern Japanese Legal and Political Documents. University of Tokyo Faculty of Law