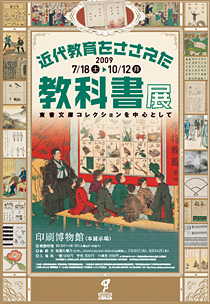 Textbooks from the Tosho Bunko and Printing Museum Collections

The Meiji Period ushered in a new era in Japan. Various new government policies were implemented with the aim of modernizing the country along the lines of the West, and among these was one promulgated in 1872 to establish a modern educational system. An environment for education had already been set in place in the Edo Period, and with the introduction of the modern educational system Japan saw the further development of education, which then contributed to the formation of a modern state and led to yet more developments in other fields. It was textbooks, which were the main materials used in schools, that played an integral part in these developments in the field of education. Textbooks were essential teaching materials that provided students with a wide range of knowledge and information. Even in the digital world of today, when educational resources are continually changing, the role that textbooks play remains the same.

Presenting textbooks that supported the development of Japan's educational system in modern times, this exhibition centers on textbooks and educational materials from the Tosho Bunko Collection, which has recently been designated as an Important Cultural Asset. Covering the history of textbooks in Japan up to and including those commissioned by the Ministry of Education after the end of World War II, the exhibition also reveals both the roles that textbooks played in society at large as well as the relationship between textbooks and the art of printing.