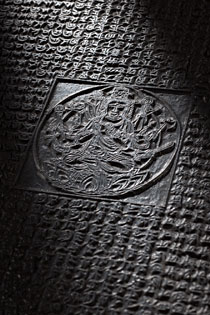 A Gift from Kukai

Opening the Doors of the Archives on Mount Koya

Shown for the First Time in Tokyo
Tracing the Roots of Publishing through Books, Prints, and Woodblocks from Koyasan

Located in Koya in Ito in Wakayama, Mount Koya is home to six temples. The Printing Museum has borrowed 79 treasures from these temples for this exhibition, including two national treasures and 31 important cultural properties. Almost none of these artifacts have ever "descended" Mount Koya before, making this a rare opportunity for our visitors.
Mount Koya is widely known for having been the site where the monk Kobo-Daishi, or Kukai, established the Shingon Buddhism in the early part of the 9th century. The temples built on the mountain required books for their religious services and esoteric rituals. Publishing on Mount Koya especially began to flourish during the Kamakura Period, and books made there came to be called "Koya editions". Centering on esoteric scriptures and texts penned by Kukai, a great numbers of the books published on Mount Koya made their way throughout Japan.
The archives on Mount Koya represent a rare case of the systematic storage of cultural properties dating back to the dawn of publishing. We hope that this exhibit will offer our visitors a chance to reflect on the importance of publishing throughout history.

Please note that some of the items on display will change on June 7th (Tuesday).