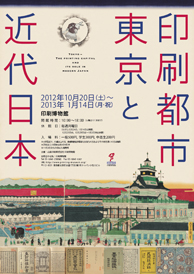 Tokyo — The Printing capital and its role in modern Japan

How exactly did it come to pass that the printing industry in Tokyo became Japan's most thriving? One of the answers to that question might be found in the relationship between Tokyo's printing industry and the modernization of Japan.

This exhibit focuses on the years between 1860 and 1890, when the foundations of modern Japan were laid. These were the thirty turbulent years of the Meiji Restoration, when Japanese government, economics, society, and culture underwent dramatic changes as Japan shed its feudal political system and transformed itself to become the first modern constitutional state in East Asia.

During those same years, the printing industry experienced dramatic changes too, as new innovations vied with traditional techniques for prominence. Whereas Japan's printing industry had previously relied on wood-block printing techniques, now such processes as letterpress printing and lithography were gradually gaining in popularity.