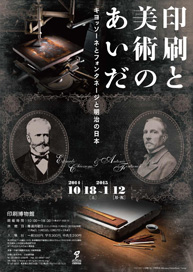 Between the Art and the Print-Chiossone, Fontanesi, and Japan in the Meiji

This exhibition presents printing works by the disciples educated by Chiossone and Fontanesi, two government advisors invited to Japan from Italy.

Edoardo Chiossone, a painter and engraver from Italy, was offered to work in Japan by the Ministry of Finance in 1875. In his new position he sculpted original plates for bills and stamps, trained pupils, introduced printing and engraving technologies from the West, and laid the foundations for modern printing in Japan.

Antonio Fontanesi, a fellow Italian, was appointed as a teacher of Western style painting at the nearby Imperial College of Engineering at about the same time. Fontanesi decided to return to Europe midway through his tenure, so his time in Japan was much shorter than Chiossone's. Yet Fontanesi's disciples became key persons in the Meiji art world and were influential in the development of modern printing.

This exhibition presents printing works by the disciples educated by Chiossone and Fontanesi, two government advisors invited to Japan from Italy.