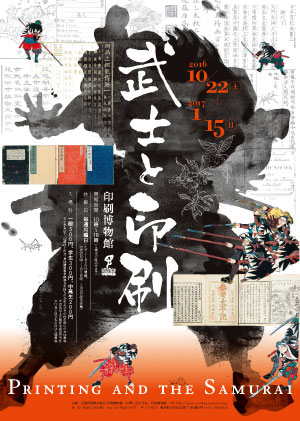 Printing and The Samurai

For most, swords and armor are the first things that come to mind when speaking of a samurai exhibition. But the world of the samurai had so much more to show. Some samurais were even printers. One of them was Tokugawa Ieyasu.

Now, four centuries after Tokugawa Ieyasu's death, we look back at the commercial printing business of the samurais. This exhibit brings together a wide range of prints produced not only by the samurai, but also warlords, generals, lords, and others who were allowed to print during the Warring States period and Edo era.

Musha-e, ukiyo-e prints of warriors and scenes of battle, were also popular during the Edo era. The fascinating warrior portraits drawn by Utagawa Kuniyoshi (ukiyo-e artist) were especially magnificent and full of energy. Yet the samurai rendered in musha-e looked very different from the actual samurai who were making prints in the same era. There was an amazing gap between the "printed samurai" and "printing samurai."

The samurai heritage of distinctive printing is a little known facet of Japanese history. This exhibition will shift from the usual focus of samurai as warriors to samurai as "intellectual" printers. "Print" played an important role in the political shift from a military government to a civilian-controlled government in the early years of the Tokugawa Shogunate.